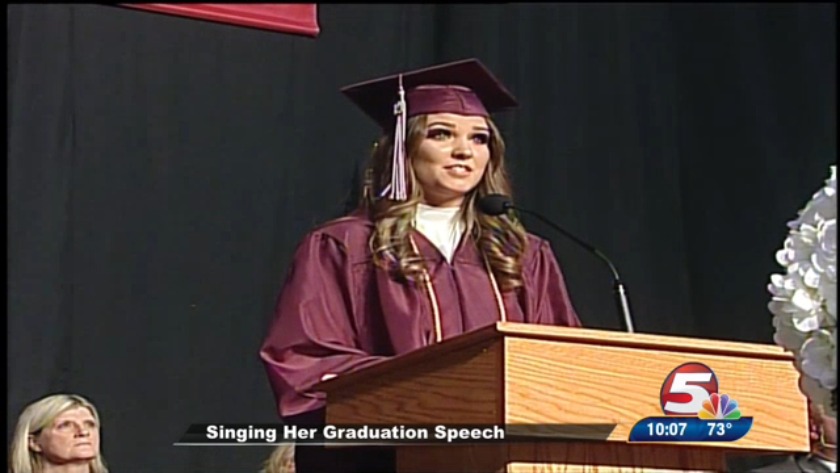 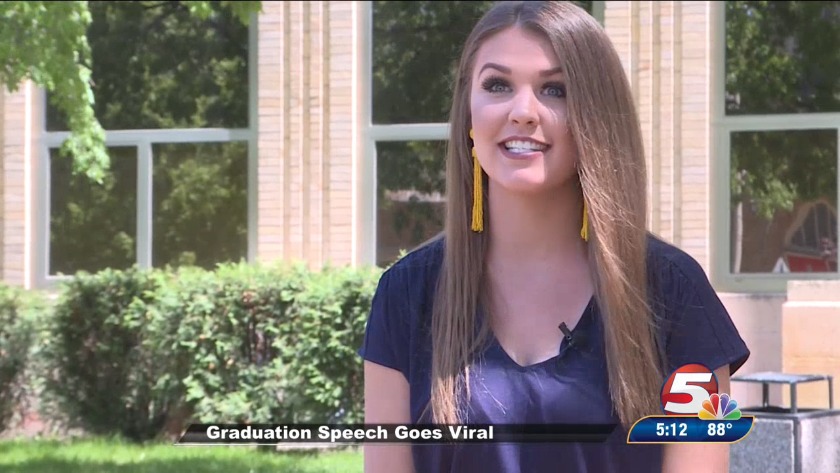 BISMARCK, N.D. - Graduation speeches can be inspiring, and even funny, but not many are remembered too long after the graduation ceremony.

But every once in a while, there’s a speech like Bismarck High graduate Sydney Helgeson’s.

“Music is something that brings people together, graduation speeches are a tradition. When words fail, music speaks,” Sydney Helgeson explained as she began her speech.

Sydney Helgeson’s graduation speech spoke volumes. She sang her speech, her very own version of Lady Gaga’s “Shallow.” The song is full of memories, from the marble staircases,

“That’s one of the jokes we say about Bismarck High,” she explained. “With the tradition comes all the marble stairs and the stairs never get easier.”

To winning the state football championship.

“Our class has always been really close so that was a cool moment that the whole class was there to support our football team and show our Demon pride,” said Helgeson.

For Helgeson, it was the best way she could think of to honor her classmates.

“There’s a lot of potential in this class. I’m excited to see what everyone accomplishes,” she said.

The You Tube video of her speech has nearly 10,000 views.

“It’s overwhelming All the positive feedback I’ve gotten back. All kinds of people I didn’t know. A lot of people that went to BHS are really proud of the Bismarck High tradition,” said Helgeson.

A tradition that Helgeson says she’s proud to be a part of.

Helgeson plans to attend the University of Alabama in the fall, where she will major in business and minor in music.

As you might have guessed, Helgeson was in choir all four of her years at Bismarck High. She was a member of the New Gen choir her junior and senior years. She also participated in all-state choir all four years, UND Honor Choir for three years, and received star ratings all four years at WDA and state music.

ORIGINAL STORY: When Bismarck High School graduate Sydney Helgeson took the podium at her graduation ceremony last month, she delivered a speech that people are still talking about.

In fact, video of her speech has gone viral.

That’s because this was no ordinary speech. Sydney chose to sing her speech.

Sydney rewrote the lyrics to Lady Gaga’s “Shallow” as a tribute to her classmates.

Students who want to give a speech at BHS graduation have to audition for a spot, and not everyone who auditions gets to speak at graduation. Sydney says it’s not something she ever thought she wanted to do.

Sydney Helgeson: I actually didn’t want to be a speaker. My mom kept encouraging me, but I just really wasn’t that into it until we came up with this idea to sing it. Then I was all for it. Of course, you can’t get me to give a speech, but I’ll sing in front of these people! It was just a really cool tribute to go out of high school with a bang and it was nice to share with all my classmates," said Sydney.

Sydney plans to attend the University of Alabama in the fall, where she will major in business and minor in music.

You can listen to the full speech at the link below. Video Courtesy: Bismarck Event Center.

BPS students get to take flight

BPS students get to take flight